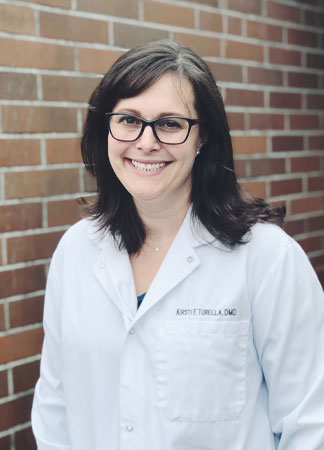 Dr. Turella was born in Scotland and grew up in a suburb outside of Pittsburgh Pennsylvania. She received an undergraduate BS in Biology from the University of Richmond, Virginia where she graduated cum laude with departmental honors. She then went on to attend the Tufts University School of Dental Medicine on an Army HPSP Scholarship. After graduating with her DMD in 2004, Dr. Turella served four years as a Dental Officer in the US Army while stationed at Fort Lewis, WA. At the conclusion of her military service, she continued her career and Federal service as a staff dentist for the Veteran's Administration at American Lake, Washington (2008-2009) and El Paso, Texas (2009-2013).

In 2011, while in El Paso, Dr. Turella was awarded the prestigious Harry S. Truman Memorial "Hands & Heart Award." This award is given annually to the VA provider whose compassion and dedication to Veterans represents the highest standards in patient care. She prides herself on effective patient communication and she believes firmly in patient education/involvement in their pending treatment.

Dr. Turella is a general dentist, with special clinical interests in implant prosthetics, removable dental prosthetics and treating those with dental anxiety.

She also has a passion for preventative dental education.  Since coming to the Peninsula in 2013, she volunteers her time in local elementary, pre-schools and middle schools annually in an effort to expand the dental IQ of local children.  She furthers her service to our community by serving on the board of our local boys and Girls Club. Dr. Kirsti Turella prides herself on compassionate patient care and service to her community.

In her free time Dr. Turella enjoys crafting, cooking, home improvement projects, and above all spending time with her family, which includes her daughters, Libby and Clare, her husband Steve and her golden retriever, Ray.